The Adonis Attack is a recurring unite attack in the Suikoden series. It usually involves a trio of attractive men from the 108 Stars of Destiny coming together to deal significant damage to the enemy.

The Adonis (Pretty Boy) attack deals 2.5x damage to one foe (with said foe becoming berserk in the process) and can only be performed once per battle. In it, Futch, Franz and Fred all look like they're about to cast a spell and as each one does, their character icon appears. Then, all three dash through the opponent from three different angles. At the end, there's a scene with a frosted screen and sparkles.

The Adonis Attack deals 1.2x total damage to one enemy. In it, Helmut and Hervey form a ball of energy between their two swords and then Sigurd jumps and throws his spike through the middle of the ball. When the spike hits the enemy so does the ball of energy. 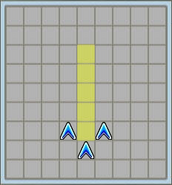