The Amur Plains (アムル平原; Amuru Heigen) are a location in Suikoden III.

The Amur Plains are an area of the Grasslands that span from just east of Brass Castle to the Duck Village. It is the location of several battles during the Second Fire Bringer War, such as the battle between the Fire Bringer and the Harmonian Army where Sarah conjures illusions that attack the Fire Bringer. It is also here that the Zexen Knights fight through Grasslanders to gain entry into Karaya after a failed attempt at a peace treaty between Zexen and the Grasslands early on in the war. The Amur Plains' northern region is a bit more forested and is home to wild horses.

The Peace Treaty on Amur Plains 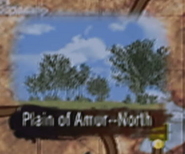