The Ceremonial Site (儀式の地; Gishiki no Chi) is a location in Suikoden III.

A Sindar ruin that lies in northern Grasslands, farther north than the Great Hollow. The Sindar ruin itself is a huge machine that can magnify the power of True Runes in ways unimaginable. Some consider the ruin a method for gaining powers of different True Runes to be focused on one individual in an attempt to gain superior power. Others consider it to be little more than a highly powerful weapon.

In 475, Luc and his Destroyers attempted to use the device at the Ceremonial Site to destroy one of the five elemental True Runes in order to forcibly change destiny which, according to his own True Wind Rune, was heading towards a bleak, lifeless future of absolute order. Normally buried below the earth, Luc summoned the site using his magic near the end of the Second Fire Bringer War.

The Ceremonial Site collapsed due to damaged sustained between the Destroyers and the Fire Bringer at the climax of the Second Fire Bringer War.

Monsters Encountered when facing against Yuber

Monsters Encountered when facing against Sarah 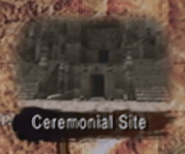