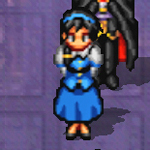 Daisy was a young woman who used to live in the town of North Window until the vampire Neclord attacked it on SY 449. She was a childhood friend of Viktor and an orphan that Viktor's family took in under their care. During Neclord's attack, Daisy decided to commit suicide rather than turn into one of his brides.

Years later, her seemingly re-animated corpse was used by Neclord during the Dunan Unification War to attempt to convince Viktor to hand over the Star Dragon Sword, saying he'd revive her if he did. However, Viktor knew anyone that was dead and then revived would only come back as a zombie and attack the living. Soon after, Viktor disposed of Daisy's body by use of a single slash of the Star Dragon Sword. Later, after the forming of North Window Castle, Viktor reburied her in the castle's graveyard under the grave titled "Daisy".