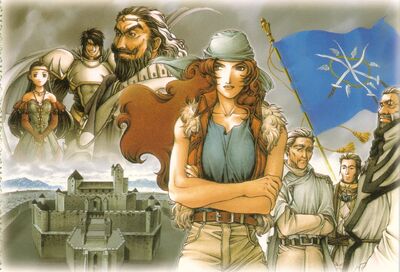 A war between the City-States of Jowston and later the New State Army and the Highland Kingdom. The war took place in the year 460, following the slaughter of the Highland Unicorn Brigade by Highland forces under the command of Luca Blight in order to facilitate the renewal of hostilities with Jowston.

A disunited Jowston quickly fractured and fell to Highland upon the death of Anabelle, but resistance was reorganized under the banner of the New State Army, led by Riou. With a steady figurehead, combined with the rapid destabilization of Highland politics, which saw three kings holding the throne in one year, the New State Army eventually managed to push Highland out of Jowston territory.

The war ended with the defeat and annexation of the Highland capital of L'Renouille. The war over, a new nation, the Dunan Republic, was established to govern over the united Dunan region.

Although the war was contested between the forces of Highland and the forces of Jowston, foreign intervention played a part. The Holy Kingdom of Harmonia sent troops under the Bishop Sasarai in aid of Highland. Also, the Toran Republic agreed to send the New State Army 5,000 troops under the command of Toranese generals. The Karaya Clan of the Grassland were also involved in the war, allying themselves with Highland in retaliation for unjust Jowston practices against their tribe in the past.

Retrieved from "https://suikoden.fandom.com/wiki/Dunan_Unification_War?oldid=124518"
Community content is available under CC-BY-SA unless otherwise noted.