The Flash Attack is a recurring unite attack in the Suikoden series. It usually involves a trio of bald men from the 108 Stars of Destiny coming together to causing significant damage towards the enemy.

The Flash Attack deals 1.5x damage to all enemies and 0.5x damage to all allies. In it Bolgan, Gantetsu and L.C. Chan line up in a row. Then their scalps flash brightly and the multi-colored lights spread out. The screen goes white and there are dozens of spots on the screen on the enemy side, damaging the enemies. If one of the characters have the Sunglasses equipped on him, it will negate the damages caused to the character. 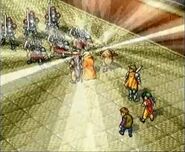