Genso Suikoden: The Woven Web of a Century

Genso Suikoden: The Woven Web of a Century (幻想水滸伝紡がれし百年の時) is a role-playing game developed and published by Konami for the PlayStation Portable. It was released in Japan on February 9, 2012. It is currently the most recent Suikoden game released and the second title that is not related to the main series.

A traditional role-playing game in much the same vein as Suikoden Tierkreis, Gensosuikoden Tsumugareshi Hyakunen no Toki features the return of the six-person party system, last seen in Suikoden V. Parties are arranged in formation on a 3x3 grid and each available character falls into one of eight classes, reminiscent of the more vague statistical ranges found in earlier games in the series. Sub-jobs can be taken on and skills can be taught between classes across time frames.

As with Suikoden Tierkreis, weapons and armour are purchased to equip to your character. Magic stones are used in the casting of spells but function more as an MP analogue than as a substitute for runes or the Mark of the Stars, magic is inherent to the characters class.

Random battles are now initiated by making contact with the enemy on the field. There are no penalties for being caught unawares nor advantages for initiating combat from behind.

Players will gather the 108 Stars of Destiny through different periods of time. Your ancestors teach you how to fight and you can learn skills from them. You’ll also interact with characters and set up mentors during in-game meals. Don’t want to fight? You can escape battles with 100% chance.

Genso Suikoden:
The Woven Web of a Century 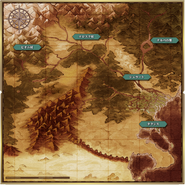 World Map
Add a photo to this gallery

Retrieved from "https://suikoden.fandom.com/wiki/Genso_Suikoden:_The_Woven_Web_of_a_Century?oldid=165137"
Community content is available under CC-BY-SA unless otherwise noted.