Genso Suikoden I & II (幻想水滸伝I＆II) is a compilation of Suikoden and Suikoden II titles. The game was developed and published by Konami for the PlayStation Portable console and released in Japan on February 23, 2006. It's one UMD disc containing both games. The game never saw any release outside Japan. 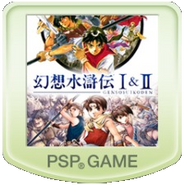 Retrieved from "https://suikoden.fandom.com/wiki/Genso_Suikoden_I_%26_II?oldid=151643"
Community content is available under CC-BY-SA unless otherwise noted.