Hero is the Tenkai Star in Genso Suikoden: The Woven Web of a Century. Although no official name was released for the Hero as of yet, he is recognized by Japanese fans as Natasaka.

A young swordsman from Telbe Village who is determined to fight the Telluspharma which appears every 100 years and devours everything. He is actually the descendant of Torwald Albarek, a great hero who saved the world from the Centennial Monster with his companions 100 years prior.

His father died when he was a child. His mother Signey was a swordswoman of the Blue Flash Style and had instructed him in its ways when he was 5 years old. He lost his mother after she was killed while fending off Ionian soldiers, leaving him only her side-arm sword which dates back to Torwald's era as a memento. Ever since, he has kept perfecting his sword-fighting for the next 100 year calamity which was due to commence.

He later meets Zephon, who tells him the secret of the mysterious tree which will change the course of history.

Role in the Game[]

As the main protagonist of the game, he is an automatically recruited character (present).

As a playable combatant with the class of a swordsman, he is able to acquire all six techniques available for swordsman class. If the player increases the relationship between him, Ilia, and Tserendulam, he will get the sub-class as a Medic and learn its skills.

He is able to participate in several Unite Attacks: 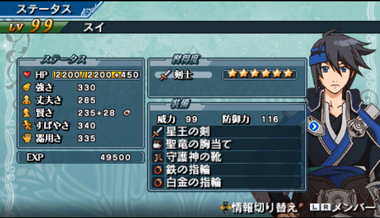