Ilia Barukai is the Tenjyu Star in Genso Suikoden: The Woven Web of a Century.

A healer who has trained in Telbe Village since she was 10 years old. She is like an older sister to Hero, Myura, and Gino. Ever since she was a little girl, she would often go out to other villages. During one of these trips, the village where she was born and raised vanished, and she was left without a single relative. However, the mayor of the capital city of the eastern region, Shuraat Town, took charge of her and she became his adopted daughter.

She only lived together with Aaron for about five years, after that she lived in Telbe Village to train as a healer. Around that time, she grew and became one of the village chief's close aide.

Role in the Game

As a playable combatant with the class of a medic, she is able to acquire all six techniques available for medic class. If the player maximizes the relationship between her and Meamei, then after a dining event her Sub-class will open, allowing her to learn Bard techniques.

She is able to participate in several Unite Attacks: 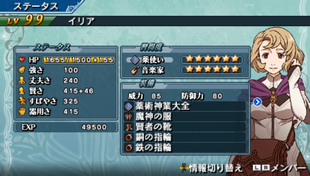