The Kobold Attack (コボルト攻撃, Koboruto Kōgeki) is a recurring Unite Attack in the Suikoden series.

The Kobold Attack inflicts 2x damage to one enemy, in it Kuromimi and Gon leap toward the opponent, hop on one foot to get closer then attack with their swords at the same time.

The Kobold Attack deals 1x damage to one enemy but then Gabocha becomes Unbalanced. In it Gengen leaps toward the opponent with Gabocha right behind him and hits it with his sword, then ducks as Gabocha shoots it with his slingshot. 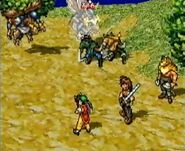