Luceri is the Tenfu Star in Genso Suikoden: The Woven Web of a Century.

Descended from survivors of Hioni Village, which was destroyed by the Imperial Army 100 years ago. She feels animosity toward the empire that destroyed the village of her ancestors. Because of this, she is unfriendly to Hero and the others, and refuses to offer information about Scarlet Axe.

Sometimes after she's recruited, a Hunting minigame will open in the HQ where the player can arrange a party to defeat the monsters provided by Luceri and get some rewards. The challenge can only be done once a day.

She has a harsh look in her eyes and speak bluntly, but she's actually a very emotional person with a strong sense of justice.

Role in the Game[]

As a playable combatant with the class of archer, she is able to acquire all six techniques available for archer class. If the player increases the relationship between her and Jansen, she will get the sub-class as a Bard and learn its skills.

She is able to participate in several Unite Attacks: 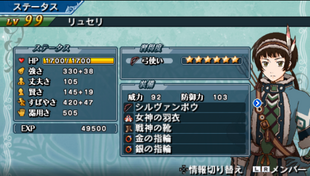