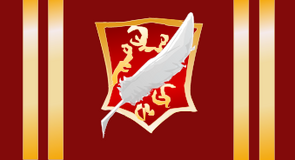 The Dunan Army also known as the New State Army, was a group of soldiers and other volunteers who fought against the Highland Kingdom during the Dunan Unification War.

The Dunan Army pulled together many different factions, including remnants of the City-States of Jowston's military, several mercenary and bandit groups as well as soldiers of the Toran Republic under the leadership of Riou, adopted son of the great Jowston hero, Genkaku as orchestrated by Shu.

After the fall of Muse to Highland in early 460, the Jowston City-States promptly disintegrated. While the remnants of the Muse army fled westwards, to Greenhill, surviving members of Viktor's mercenary army, including Riou, headed south, to South Window, allying themselves with Lord Granmeyer.

However, while investigating an incident at North Window, South Window quickly fell to Highland. Cornered at North Window, the group managed to recruit the help of master strategist Shu and shockingly forced the Highland forces to retreat.

The wave of optimism and hope following this victory, forged in equal parts by the mercenary group and the South Window troops who had turned on Highland in the midst of battle led to the swift establishment of the Dunan Army.

The Dunan Army, as the war went on, grew in size through fame and alliance. Soon after it's formation, it secured the entry of Two River forces and also gained around half of both the Red and Blue Knights of Matilda.

As the war progressed, the Dunan Army also took in the remnants of both Muse and Greenhill forces, gained the trust of a wary Tinto and even entered into an alliance with the Toran Republic which saw 5,000 troops make the trip to Dunan to fight with the Dunan Army.

At its peak, the Dunan Army totaled approximately 20,000 soldiers.

Despite popular opinion, the Dunan Army was disbanded at the end of Dunan Unification War with it's former base at North Window having grown into a prosperous town in it's own right. However, many soldiers and officers did join or otherwise contribute to the Dunan Republican Army following it's foundation.

The Dunan Army is the national army of the Dunan Republic. It was founded after the Dunan Unification War of 460, which saw the nations of Jowston and Highland amalgamated into one state. The Dunan's only major military activity to date was in 472, during the Higheast Rebellion. There, the Dunan Army managed to push back the Harmonian Army which had entered the region to reclaim the territory that had belonged to them some two hundred years prior.