The Ninja Attack is a recurring Unite Attack in the Suikoden series. It usually involves a duo of ninjas from the 108 Stars of Destiny coming together to causing significant damage towards the enemy.

The Ninja attack deals 2x damage to one enemy. In it Kasumi uses an attack similar to the Shrike Rune and after she lands Kage and Fuma throw their Shurikens in a X shape throught the opponent.

The Ninja Attack deals 1.5x damage to one enemy. In it Kasumi uses the Shrike Rune and causes a small explosion on impact then Mondo slashes throught the opponent causing another small explosion. Damages are increased if one of the characters have the Secret Writings equipped on him.

The Ninja attack deals 0.5x damage to target and foes in the area, but can only be uses once per battle. In it Ayame and Watari stand on opposite sides of the enemies then start moving at super high speeds attacking in a diamond shape pattern. They do this several times.

The Ninja attack deals 1.0x total damage(at lv.1) to one enemy. In it Mizuki and Akaghi fly around leaving a trail of leaves. They then appear high in the sky where they come slamming down on the enemy weapons first before striking a pose. 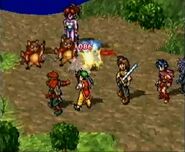 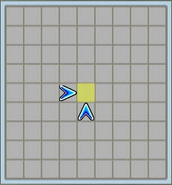