The Queendom of Falena (ファレナ女王国, Queen's Nation of Farena?) is a parliamentary monarchy located on the northern coast of the Southern Continent. Falena shares its borders with the New Armes Kingdom to the south-east and the Nagarea Theocracy to the south-west as well as a naval border with the Island Nations Federation to the north.

-250: Foundation in Legend
According to historical records, the Queendom of Falena was founded in the year SY -250, in the wake of the destruction of the Southern Continent following the collapse of the Ancient Armes Dynasty. Legend states that this happened with the emergence of the first Queen whom appeared from the sky bearing the Sun Rune in the Lunas region.

This woman was said to have come from deep within the Ashtwal Mountains. Any further details on the origin of this first Queen are unknown.

140-154: Establishing Stability
The years following Falena's foundation saw the nation grow and progress, eventually leading its eastern borders to lie by lands which contained a number of tribal chiefdoms. In 140, a leader of one such clan, Halad of the Ishvaak Clan, petitioned the Queendom to offer its support in Halad's goal of uniting the tribes.

In order to foster stability in the region, the Falena Queendom agreed and by 154, Halad's crusade was finally complete and the New Armes Kingdom was established with Halad as it's king. The name of the new kingdom, used in order to grant New Armes political and historical legitimacy based on the past of the Ancient Armes Dynasty was hotly contested by Falena, however, leading to tense relations between the two nations which would remain for over 300 years.

212: Political Shifts
The year 212 saw Queen Khorshed Falenas move the capital of Falena from Stormfist to a newly built city, Sol-Falena. With the vacation of the royal family, the city was granted to the House of Aethelbald. The New Capital Calendar was established with this move. The House of Aethelbald's grip on Stormfist would only last a little under a century, the House eventually being usurped by House of Godwin.

337-376: Foreign Policies
337 saw first contact made between Falena and the Island Nations Federation, leading to the establishment of an Island Nations colony at Nirva Island. Meanwhile, relations with the Nagarea Theocracy disintegration with its invasion of the Sauronix region around the year 360, an area the Falena Queendom had been unable to annex due to the Dragon-Horse Peoples residing there. The two forces allied against Nagarea and eventually repelled the nation. Following the conflict, the Feitas Dragon Cavalry was formed by the Dragon-Horse People and the region was absorbed into Falena.

In the year SY 376, what became known as the Great Earthquake struck the southern reaches of Falena. Because of this earthquake, the land route that connected Falena and Nagarea was destroyed beyond repair. Thus, the once-terrifying Nagarist threat became far less serious.

433-438: Conflict of Succession
During the reign of Olhazeta Falenas as Queen, a struggle began between her daughters, the legitimate heir to the throne Shahrewar Falenas and her younger sister Falzrahm Falenas over who would succeed. A bloody political struggle broke out, Shahrewar and Falzrahm backed by the House of Godwin and the House of Barows respectively, polarising the nation between the noble families.

Following the death of Queen Olhazeta Falenas in 438, a brief succession struggle erupted between the two princesses, the legitimate heir to the throne Shahrewar and her younger sister Falzrahm Falenas. Each sister mercilessly ordered Nether Gate assassins to murder their respective opponents. Ultimately, tired and weary, Shahrewar withdrew her right to the throne, leaving Falzrham to be crowned Queen. Despite this, Falzrahm had Shahrewar murdered by Nether Gate, decisively ending the struggle.

441: War with New Armes
Falzrahm's reign only lasted three years before her death in SY 441. Due to the legacy of the succession conflict, civil war between the House of Barows and the House of Godwin seemed imminent as Arshtat Falenas took the throne. To avoid further succession struggles, Haswar and Sialeeds (Arshtat's younger sister) formed a pact with Arshtat to allow her to take the throne uncontested and both Haswar and Sialeeds agreed not to marry.

Seeking to take advantage of the civil unrest, the New Armes Kingdom quickly launched an attack, invading eastern Falena. This attack allowed Arshtat to unite the nation against New Armes and eventually the Armes offensive was repelled and Falena was secure. However, the political issues in Falena had not been resolved and could not be while the two most prominent Falenan houses held so much political power.

447-450: Fall of the Houses
SY 447 saw the people of Lordlake protest the building of a dam by the House of Barows which would cut off the flow of water to the town. Due to mishandling of the situation by the Barows, the crowd rioted, destroying the dam. Galvanised, the crowd planned on marching to Sol-Falena to lodge a protest with the Queen.

Hearing this, Salum Barows ordered some of own men to infiltrate the group and upon passing the East Palace, to loot it, stealing the Dawn Rune. Meanwhile, the House of Godwin planned to use the incident to claim the Sun Rune itself. Tactician Lucretia Merces betrayed Godwin and advised Arshtat to bear the Sun Rune herself. However, adversely influenced by the Sun Rune, upon hearing of the looting of the East Palace by what appeared to be Lordlake citizens, Arshtat used the rune on on Lordlake, drying up the area completely.

Conflict between the various groups came to a head in 449 when, following the engagement of the then Princess Lymsleia Falenas and the Gizel Godwin, the House of Godwin stormed the Sun Palace in a coup. Queen Arshtat was killed in the events that followed and the Godwins successfully installed Lymsleia as a puppet Queen.

Civil war began with the surviving royals forming the Loyalist Army. As the war continued, the Godwins, desperate to keep the popular Prince’s forces from overthrowing them, sought help from New Armes. Despite this short-lived alliance, the war came to an end the following year with the capture of Sol-Falena. Following the war, Lymsleia Falenas was properly crowned as Queen.

Following the fall of both the Godwin and Barows houses, the Senate dissolved itself and, in its place, a Parliament was formed. This time, rather than being dominated by political parties bound by family ties, members were elected from each town in Falena, forming a more representative legislative body.

The Falena Queendom is currently a parliamentary monarchy. Falena can only be ruled by a Queen, hence the name 'Queendom' rather than the traditionally used 'Kingdom'. Each Queen does have a consort, but they are not considered kings; instead, the husband of the Queen becomes the Commander of the Queen's Knights. Commanders of the Queen's Knights, prior to the year 450, won the position during the Sacred Games, but this tradition no longer applies.

The New Parliament is comprised by appointed representatives and overseen by a chairman. Each city in Falena chooses a representative, giving each town a voice in national politics for the first time and ending the domination of noble families in Falenan politics.

Prior to the current political system, Falena's highest political body was the Senate. Traditionally comprised of several parties, including the powerful Barows, Godwin, and Rovere factions. Though the Queen held (and, technically, still does hold) executive powers, the senate was vastly influential in national politics, able to suggest and force through national policies. In the years prior to the dissolution of the senate, the body had become widely imbalanced and polarised, leading to the political climate that created the Falenan Succession Conflict and the Falenan Civil War, the latter event leading to the establishment of the New Parliament.

The Queendom of Falena extends over a vast portion of the southern continent. Falena shares its borders with several countries, including the New Armes Kingdom to the south-east and the Nagarea Theocracy to the south-west, and a naval border with the Island Nations Federation to the north. The Feitas, a river that plays a great amount of importance in travel within the Falena Queendom, is formed in the Ashtwal Mountains in the north and flows throughout the country. Most of the major cities of the Queendom of Falena are located on the Feitas including the capital, Sol-Falena.

Though most of the Falena Queendom's climate is temperate, the south-eastern tip of the country near Sable is extremely dry and arid and the mountainous northern tip of Falena is covered in permafrost and ice. 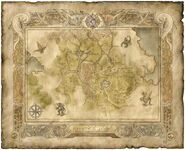