Rean Penenberg is the main antagonist in the first chapter of Genso Suikogaiden Vol. 1. A vampire sired by Sierra Mikain many centuries ago, Rean refused to die once the Moon Rune was stolen by Neclord and became a vampire who feasted on humans to survive.

A young knight in the service to a monarch, Rean Penenberg was gravely injured during a surprise attack. He wandered throughout a woods nearby, meeting Sierra Mikain, a resident of those woods for many a year due to her desire to isolate herself from society on account of her Moon Rune, whom he asked to see if his liege were still alive. Sierra traveled to the scene of the attack, where she found all those he had been charged with protecting slain; after relaying this news back to Rean, Rean cursed with his last breath that he had been unable to save them.

However, this would not prove to be the end of Rean's life; Sierra, taking pity on the young man, used the power of the Moon Rune in order to turn Rean into a vampire by sucking his blood and allowing him to suck hers in return. Rean, quite thankful to Sierra, swore that although he must go in order to seek revenge for the death of his monarch, that he would return to her soon after. He did so, and the two returned to Sierra's hut in the woods, spending many happy years together.

Fall of Humanity
Eventually others would wander into the same woods, often in similar situations to Rean's. Sierra would use the power of the Moon Rune to help them; those who were saved by her powers eventually founded Blue Moon Village, where the residents would revere Sierra as the Coven Mistress. Rean assisted Sierra in running the village. Thanks to the power of the Moon Rune, which was placed in the center of the town, the village was able to thrive for centuries.

However, in SY 90, Neclord, a charismatic recent recruit to the village, stole the Moon Rune during a village ceremony. With the rune's effects torn away from the villagers, this left the resident of Blue Moon Village with a gory choice to make: feed upon humans, or die. Rean chose to embrace his bloodlust, adapting to life without the Moon Rune by feeding upon other living creatures for the first time. He was not alone in this choice; several followed him, though others chose to die rather than feed. Sierra, devastated by the choices of many to feed and the deaths of so many good friends, decided herself to become a vampire hunter, hunting those who sought to harm others.

Encountering Sierra
Rean, however, would not meet Sierra for several centuries. Eventually traveling near the city of Muse in the the City-States of Jowston, Rean build a large mansion, Penenberg Manor, where he would feed upon unlikely travelers, making them his undead slaves. There, Rean also sired several servants to do his bidding, including a butler and Ayana, a young maid. Rean was reunited with Sierra in SY 460, however, when she arrived at Penanberg Manor along with Nash Latkje. Rean allowed Sierra to stay within the Manor, but declined to meet her, sending his servants to take care of the traveler's needs.

However, during the night, Rean's servants and undead attacked those staying within the manor, murdering a Kobold family who had stopped for rest in the night. Nash, however, proved able to defeat Rean's minions, taking out several undead as well as his butler and Ayana, whom Nash was able to destroy with a holy figurine. Faced with this, Rean had little choice but to face Nash and Sierra.

When he first revealed himself, he pretended to be naive to Sierra, hoping to get close to her so that he could suck her blood, and thus become even more powerful. However, Sierra did come closer to him, albeit unfooled by his put-upon naivety; her plan was to stab him, so she could then use the Song of Evanescence to destroy him. However, Sierra did not foresee Rean's plan, and so Rean wasted no time in sucking a bit of her blood, greatly enhancing his already powerful abilities, and weakening Sierra, so much so that Sierra fell unconscious. Rean rejoiced in his new power, saying he wanted Sierra to stay with him forever in the manor. 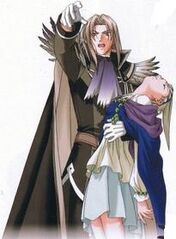 Nash attempted to battle Rean, but after drinking Sierra's blood, Rean clearly outmatched Nash, who proved no match for his new power. The two fought fiercely, eventually moving outside of the mansion as they battled. Nash attempted to retrieve Sierra from Rean and revive her, this proved successful and Sierra, needing to restore her power, drank some of Nash's blood; this angered Rean, so much so that he lifted Nash above him, choking the young Harmonian agent effortlessly, knocking Nash unconscious.

However, with his attention turned toward Nash, Rean was unable to see Sierra regaining her strength. Quickly advancing towards him, Sierra attacked Rean, surprising him further. Wasting no time, Sierra quickly cast the Song of Evanescence, taking Rean's soul and thus killing him. With his final breath, Rean told her that he only wanted to go back to their cottage in the forest where they were together.