"What? That's right, this is Rockland. It's called Rockland because except for the rocks it's a barren land."
—Rockland Villager, Suikoden

Rockland is as a small town that, despite its closeness to the capital, is one of the more peaceful and quiet towns within the 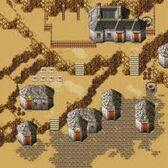 Arlus region. The stew of the chefs of Rockland are said to reach new culinary heights. It also boasts extensive mineralogical natural resources, making rock a cheaper building material than in many regions; nearly all the houses built within Rockland are made out of rocks.

Rockland was home to a great deal of political corruption during the last days of the Scarlet Moon Empire. The then Governor, Grady, took the taxes collected from the citizens of Rockland and used them for his own benefit, rather than send them on to the capital properly. In SY 455, members of the Imperial Guard were dispatched to Rockland to investigate this. Though originally mislead by Grady into arresting two members of the Mt. Seifu Bandits, when the same group learned that the two men were innocent, they returned to free them, this time working not for the Empire but for the Liberation Army. Having been driven out of his mansion during the ruckus, Grady fled the area. Disgraced, Grady was fired from his position, and a new Governor was appointed, restoring peace to the troubled town.

Please help us improve Suikoden Wiki by creating or editing any of our articles.
Retrieved from "https://suikoden.fandom.com/wiki/Rockland?oldid=148874"
Community content is available under CC-BY-SA unless otherwise noted.