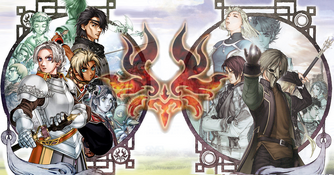 The Second Fire Bringer War is the second war between the Grasslands and Holy Harmonia.

Once again, as in the original war, the Grassland armies were a combination of the Six Clans of the Grasslands, also known as the Fire Bringer, led by the Flame Champion. Unlike the original Fire Bringer War, the country of Zexen, the Unnamed States and a couple of units from Harmonia's Southern Defense Force joined in to aide the Fire Bringer. However when Harmonia discovered that one of its Bishops was after the true runes-- not for Harmonia's sake, but for his own desires-- they sent another of their Bishops to help stop him and his group.

The purpose of the war was to collect the true runes and possibly to further Harmonia's borders.