South Window City (サウスウィンドゥ市) is a location in Suikoden II.

South Window is a city located to the south Dunan Lake and Kuskus Town. It is one of the 5 major State cities, the others being Muse City, Two River City, Greenhill City, and Tinto City.

South Window City was the capital of the Dunan Monarchy before its collapse in 252, when it became an independent City-State for over fifty years. It was reorganized as a principality among the City-States of Jowston in 314.

Its placement near to the border it shares with Toran Republic is a mixed blessing, during many times in the past, the former Scarlet Moon Empire and present day Toran Republic had battles against the South Window forces. In SY 447, South Window troops joined with Tinto forces in invading the Scarlet Moon Empire as it was occupied with internal strife during the Succession War, taking Kalekka before being driven out by Barbarossa Rugner's forces.

In SY 456, soldiers from South Window and Tinto would invade again, this time in response to a letter sent by Mathiu Silverberg warning of a (false) Scarlet Moon attack. The troops managed to occupy Senan for some time following the end of the Toran Liberation War, but in SY 458, South Window withdrew when Toran Republic forces invaded in order to reclaim the region. The South Window withdrawal, effectively leaving the Tinto forces alone to fight for themselves, led the Tinto City-State to somewhat resent South Window as they too, were forced to pull out of the region.

Although parts of the principality would come under renewed Highland occupation as the war continued the presence of the Allied Army headquarters at North Window Castle ensured that the area would not be subjugated. 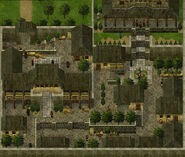