Suikoden, released as Genso Suikoden in Japan, is a role-playing game that was released on the PlayStation (also released on the Sega Saturn later on in Japan). Set in a fantasy world resembling feudal China, Suikoden is the first and founding game of the series.

The Scarlet Moon Empire has been peaceful since the Succession Wars, 15 years earlier, at least in the capital city of Gregminster. Outlying areas report heavy taxation, exploitation by imperial troops and general discontent. While small mobs have lashed out, there has been no real resistance to the Empire, though rumors speak of a small Liberation Army.

The Emperor Barbarossa maintains rule of his lands with the aid of five Great Generals, one of whom is Teo McDohl and the Court Magician, Windy. While home in Gregminster with his son, Tir McDohl, General Teo is suddenly recalled to the northern lands to deal with a rebellion. While he departs, the young Tir enters the service of the Imperial Forces along with his servant/serfs Gremio, Pahn and Cleo as well as his best friend Ted. However destiny and events soon conspire to change Tir's path in life, involving him in a fateful encounter with the Rune of Life and Death (nicknamed Soul Eater). Tir also learns that he is destined to be the "Tenkai Star", a prophesied hero that will unite the 108 Stars of Destiny in order to bring about a new age of prosperity.

Genso Suikoden is the first game of the series and introduces the world as well as several common elements that will play significantly throughout the game. Among them are the 27 True Runes, great artifacts that can change the destiny of the world and render its bearer immortal...for a price.

Genso Suikoden plays like a traditional Console RPG, with the player moving characters across a three-dimensional landscape with two-dimensional character sprites, meeting new people and engaging in battles along the way. Combat is turn-based, giving the player the opportunity to select their actions at their own pace.

The purpose of the game is to recruit as many Stars of Destiny as possible, all while progressing through the game's story by completing various quests. Though all the characters remain usable at any time, a party of up to six characters can be used for battles.

Important Locations in the Game[]

In September of 1998, Genso Suikoden was ported to the Sega Saturn in Japan as a Director's Cut version, and included a few changes:

In the same year as the Sega Saturn version, Konami released the game onto Microsoft Windows in both Japan and China. The game features a completely new interface based around the Windows system where the menu screen and dialogue are presented in their own windows and can be interacted with the mouse. Everything else is exactly the same as the original Playstation version.

In 2006, Konami ported Suikoden I and Suikoden II together as a combo pack with minor changes to both titles, onto the Playstation Portable system. Changes Included:

The port was released only in Japan.

On December 23rd 2008, Konami released the original Playstation version of Suikoden on the PSN under the PSOne Classics collection for PlayStation 3 and PlayStation Vita. 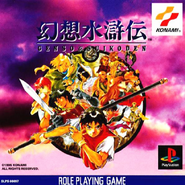 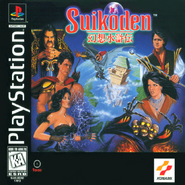 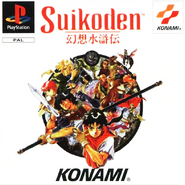 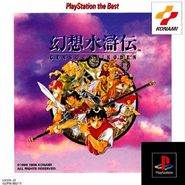 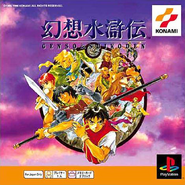 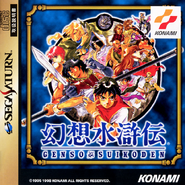