Did you hear that? We're mobilizing now, what do you intend to do?
The following article has significant spoilers for Suikoden II.
Well, if you'll excuse me.

Suikoden II, released as Genso Suikoden II in Japan, is a role-playing game developed and published by Konami for the PlayStation console. It is the second installment in the main Suikoden series.

Although stylistically similar to the first Suikoden, the sequel improved dramatically upon virtually every facet of the original. The sprite-based graphics were enhanced to take advantage of the PlayStation's broader color palette as well as to demonstrate greater emotion and fluidity in character animations. The plot and setting were more fully and realistically developed in tandem with the game's pacing. Animated CGI cutscenes were added to specific, major story points. Numerous mini-games and time-specific sidequests were included and some control was given to the player over which characters could be recruited to fill the roster of the 108 Stars of Destiny.

In a tradition that would continue with most future installments, Suikoden II allowed memory card data from a Suikoden save file to be loaded at the beginning of a new game. This allowed a player to not only import improved statistics, levels and equipment on recurring characters, but unlocked additional plot points and allowed for the recruitment of Suikoden's hero in Suikoden II.

Suikoden II features a game world presented in the traditional top-down view of console role-playing games. The player controls a sprite of the main character through towns and the World Map to interact with objects and NPC's, thus advancing the plot and unlocking secrets and sidequests. Like its predecessor, Suikoden II features random battles where a party of six characters are controlled. Commands to fight, use Rune magic, an item or flee are available. Players also have the option of allowing the AI to automatically conduct a round of battle without needing to manually input commands. A battle party of sufficient level above encountered enemies will see its flee command changed to either bribe or let go, which will either cost Potch (the game's currency, changed from the Bits of the original) or simply release the enemy to end the combat.

Additional combat modes include duels between the main character and another (typically a boss or recruitable NPC) that relies upon a rock-paper-scissors approach to telegraph enemy intent and hint at the appropriate response. Army Battle across world map-terrain that use a turn-based strategy format to effect conflict between regiments of soldiers also take place at certain parts of the main storyline. Certain units are, to some degree, more effective against others (archery units, as an example, have a greater chance to inflict lasting damage on mage units) although attack and defensive values are taken into consideration when resolving specific unit-to-unit combats.

Characters the player recruits are generally divided into one of two major classes: combatants and non-combatants. While some non-combatants do take an active role in war battles, combatants themselves are those characters which can be placed in the player's usual six-member battle party and individually outfitted with armor and Runes. Like with Suikoden, weapons are unique to each character and can be honed by a blacksmith to increase their overall attack power.

The Rune system has been expanded over the original. Combatants have now up to three Runes slots (Left Hand, Right Hand, Head) to equip the runes (not all 3 slots are availables directly, but the slots unlock as the ccombatants gain more levels and magic powers). Also, virtually all weapons have the ability to be imbued with a single Rune, unlike the elemental pieces of the prior game. Though a player can equip multiple elemental runes, their MP pool is shared, so a player must be cautious of casting spells haphazardly.

Another new addition is the Rune Affinity system, where each character is graded on their compatibility with one of the magic element types. Higher affinity will raise the effectiveness of the healing magic and the damage of spells. Lower affinity will lower these parameters though if a character is ranked at the lowest, they get a magic bonus but also a chance to have the spell backfire on the party.

Like before, the player will also eventually gain control of a headquarters, which will change as the player recruits additional characters to the roster of the 108 Stars, unlocking additional sidequests and mini-games together with the overall effectiveness of the player's army in the process.

The game begins with an overview of the Highland Army's Youth Brigade camp as the junior soldiers settle down for the night. Talk amongst the recruits signals that a conflict between the Highland Kingdom and the City-States of Jowston is on the eve of its conclusion, with an armistice having just been signed, thus paving the way to a peace treaty. One young recruit (nominally Riou in the non-canon novelization) and his life-long friend Jowy, speak with their fellow comrades and brigade commander, Rowd, before turning in for the night.

They wake up to the sounds of battle and cries of anguish, horrified to discover the camp aflame and most of their friends slain, mortally wounded or fleeing in abject terror. Riou and Jowy head into the mountains until pausing to reflect that whomever their unseen attacker is, they must know the road they're on is the only way out of the mountains in which their camp was located. Turning back to inform Rowd of this, the pair are instead met with a terrible sight: they find Rowd meeting with Prince Luca Blight, who seeks to continue on the war in spite of the recent armistice for the sole purpose of bringing Jowston under his boot heel.

Rowd is confronted by Jowy - Riou quickly pulls him away to the cliffs behind their camp, with Highland soldiers in close pursuit. Seeing a dive to the rapid waters below them as their only means of escape, the friends strike a nearby stone double-over and make a pact to return to this spot in the event they're separated, once the conflict has ceased. So agreeing, they leap off the cliff, with Rowd unconvinced they've perished in the fall.

Riou awakens sometime later in the company of a Jowston mercenary, a bear of a man named Viktor. Viktor ask questions to Riou, and Flik the chief commander, join the scene. Denying Riou's claim that the City-State and Highland are still at war, much less the supposed traitor attack on Highland's own youth forces, Flik and Viktor takes him back to the Mercenary Fortress as a prisoner of war. Here, Riou is tasked to several menial duties (eventually earning enough trust to accompany a Kobold mercenary on an errand to a nearby village) until Jowy is also caught and brought to Riou's cell. The two plan an escape and flee the fortress in the middle of the night, making their way back to their hometown of Kyaro, in Highland, by accompanying a travelling circus troupe. There, Jowy and Riou part ways - Riou encountering his sister, Nanami (who previously believed him killed) while Jowy discovers that the Highland army has painted he and Riou traitors responsible for their brigade's slaughter. Jowy is disowned by his family and turned over to the authorities in the same instance that Riou and Nanami are captured. Marched to the gallows in short order, Jowy has a brief exchange with Jillia, the princess of Highland, asserting that their nation betrayed them and not vice versa. Rowd, their former commander, presides over the execution and openly pontificates to the fact that his decision to go along with the brigade's culling was his weariness of being relegated to such a minute position. The deaths of their brethern were not just to serve Prince Luca's bloodthirsty ambitions in furthering the war, but to advance Rowd's military career as well. During his speech, Viktor and Flik arrive unseen, quickly overwhelming the Highland guards and freeing Riou and Jowy. With Rowd seeing the tables turned and fleeing, the four 'rescue' Nanami from her incarceration and return to the Mercenary Fortress in Jowston territory.

Disturbing news quickly reaches the fort by way of Apple, a student of the famed strategist Mathiu Silverberg (who aided the rebel army in the first Suikoden), that Luca Blight and the Highland army is already on the move. Seeking to even the odds, Viktor and Flik assert they're still in possession of the same Dwarven-made Fire Spears used to counter the powerful Scarlet Moon cavalry two years prior, though they've since rusted with disue. Contracting Riou and Jowy's help, they travel to the woods east of Ryube Village in search of Tsai, a renowned weaponsmith who can restore the Spears. Upon recruiting him, they return to the village only to find it aflame as the townsfolk are mercilessly slaughtered by Highland infantry. Luca himself demonstrates a particularly sadistic interest in brutally torturing every civilian who falls under the shadow of his blade. Knowing they haven't the ability to stop the massacre, the party must sit and wait out the tragedy before continuing back to Viktor and Flik's fort. None sooner than they arrive and Tsai restores the Spears that the Highland army attacks: Fire Spears in hand, the small mercenary group easily defends against the Highland attack, but the vigor of their enemy proves greater than they anticipated. Attacking again, with the Fire Spears losing their efficacy, the mercenaries are quickly overwhelmed and slaughtered. When Riou and Jowy went to save Pilika, they saw Luca Blight killed Pohl and Pilika that whitness that incident are shocked and when Riou and Jowy tried to save Pilika by defending her just as Luca about to strike yet been throwed away due to Luca was too strong for both of them to be handled. Just as Luca about to strike Pilika, what few survive detonate the remaining Spears at Flik's behest, the survivors escaping to the north as the fortress is consumed by flame.

After escaping the Mercenary Fortress, Riou, Jowy, Nanami and three random characters from recruitment will appear and Pilika became mute due to shock. During their journey through Toto Village, Pilika took them to a shrine which her father was the caretaker. Riou and Jowy were magically transported inside by the seeress Leknaat, who grant each of them half of the Rune of the Beginning; with Riou given the Bright Shield Rune, and Jowy the Black Sword Rune.

They continued their journey to Muse only to be denied entry due to increased security. Dissapointed, they went to the nearby White Deer Inn. The Innkeeper, Hilda gave them a warm welcome, while her husband, Alex, was being chastised by the citizens of Muse when he asked them to help him with his treasure hunt in the nearby Sindar Ruins. Realising that Alex must have an entry permit to enter Muse, the group struck a deal to help him with his treasure hunt in exchange for the entry permit. Despite initial difficulties, they finally managed to gain entry to Muse and reunited with Viktor and Flik.

Released in 2003. Exclusive in japan and china

Released in 2006 bundled with Suikoden. 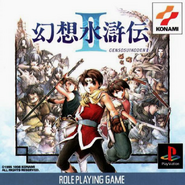 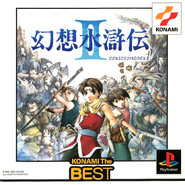 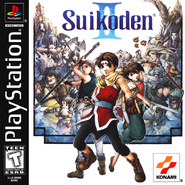 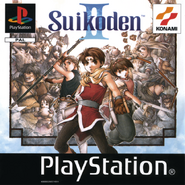 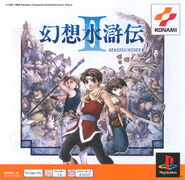