Well... I wouldn't call myself a scholar. I'm just a beginner.
This article needs to be rewritten according to the specifications in the Manual of Style. You can help the Suikoden Wiki by rewriting it.

Suikoden Tierkreis, originally released in Japan as Gensō Suikoden Tierkreis (幻想水滸伝ティアクライス?, with "Tierkreis"), is a role-playing video game for the Nintendo DS developed and published by Konami.

Suikoden Tierkreis is the first Suikoden Game that is not related in the main series.

Suikoden Tierkreis is a traditional JRPG where the player must navigate through three-dimensional environments and complete story-based objectives to advance the narrative. Taking advantage of the Nintendo DS' dual screens, gameplay, text, and menu options are often displayed on the bottom screen. On the field, the top screen shows a landscape image of the player's current location, along with the name of that location and season information. During battle the top screen also displays character information such as hit points, magic points, etc.

Players move their character through the game using either the directional pad or the stylus wand to take advantage of the DS' touchscreen function. While advancing through the game, the player must interact with non-player characters to move the story forward and allow new scenarios to become available for play, as well as to discover new items and areas.

During gameplay, players will randomly encounter enemy creatures every few steps while in hostile areas. Battles in Suikoden Tierkreis use a turn-based approach where players input commands for all active characters in their party before each combat round, with the corresponding actions taking place in accordance with each character's "speed" rating. A player's party may consist of up to four characters at a time, with special combination skills becoming available depending on which specific characters are included. When a player defeats a group of enemies, they are awarded experience points that go toward increasing their party member's levels, thereby making them stronger and able to use more special skills in battle. Defeated enemies may also provide trade items that can be sold for money to purchase goods in-game such as restorative items and better equipment that will allow the player to battle even stronger enemies. By using the DS' Wi-Fifunction, two players each with their own game card can connect to each other to exchange characters and items, as well as gain access to unique battle scenarios.

The game is set in a world with several diverse nations and tribes and inhabited by a range of creatures including humans, Roar (similar to the Kobolds and Nay-Kobolds of previous games), Porpos-kin (small, penguin/dolphin like creatures), and Auster (a race of horned giants).

The game opens as the leader of 108 heroes engages the main antagonist known as "The One King" in battle. It is currently unknown whether the defeat shown in the introduction precedes the game or if the game is actually a flashback leading to that scene. The game is set in a parallel world to the main world of the series, which is one of the many worlds in the Suikoden multiverse, known collectively as the Infinity.

The protagonist is an energetic young man from Citro Village who eventually ends up fighting a mysterious organization that preaches a fatalist philosophy in which the future is predetermined.

The concept of the Infinity has been previously explored in other Suikoden games: monsters from another dimension are summoned by Windy and Leknaat in Suikoden I, and by Luc and Sarah in Suikoden III; Nash Latkje, Humphrey Mintz, and Futch visit The World of Wings and Scales in Suikogaiden II, a parallel world where only dragons exist, while dragons are only able to exist in the main Suikoden world via the Dragon Rune, one of the 27 True Runes; the Fog Ship Guide, who appears in Suikoden IV, hails from another world; and the final battle of Suikoden Tactics takes place in the World of Emptiness, a parallel world from which monsters are summoned. Additionally, it is implied that recurring characters Viki, Yuber, and Pesmerga likely come from parallel worlds. 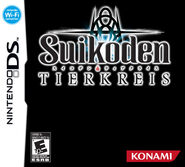 Suikoden Tierkreis
KONAMI
Add a photo to this gallery

Retrieved from "https://suikoden.fandom.com/wiki/Suikoden_Tierkreis?oldid=149186"
Community content is available under CC-BY-SA unless otherwise noted.