Tee hee! Welcome to my shop!
The following article has significant spoilers for Suikoden V.
It bothers me how many come to my shop and don't even look at my runes...

Suikoden V, released as Genso Suikoden V (幻想水滸伝V) in Japan, is a role-playing game developed and published by Konami for the PlayStation 2 console. It is the fifth entry in the main Suikoden series.

Suikoden V was directed by Takahiro Sakiyama and written by Kazuyoshi Tsugawa. It centers around the political struggles of the Queendom of Falena, and takes place six in-universe years before the events of the first Suikoden. The player controls the Prince of Falena, Freyjadour, and travels the world, acquiring allies and dealing with the problems of the nation. The game features a vast array of characters, with over sixty characters usable in combat and many more able to help or hinder the Prince in a variety of ways.

Suikoden V is a console role-playing game and thus shares many traits with past titles in the series. A new feature involves a party member specifically following Freyjadour onscreen, who can be spoken to in order to remind the player what the party's current task is should they forget; the majority of the time this character is Lyon, the Prince's bodyguard, but task-specific or story-specific characters occupy the role as well.

Suikoden V introduces many new features. The function of supporting members Stars of Destiny within the party has been expanded. In this game, if a blacksmith, a rune master or an appraiser is in your party he or she can do the tasks they do at your headquarters such as appraising, sharpening weapons or equipping runes directly from the menu. The Battle system has been returned to 6 battle members, whereas it's predecessor Suikoden IV had only 4 battle members, which many Suikoden fans did not like. In addition to the battle system, a new feature of Suikoden V is the battle formation system, in which players can change their battle formations for different effects, with a stats bonus added to the battle party, which can make the battles more interesting. The Tactical battle System is now fully in real time as well, unlike its predecessors. The Duel system has also been expanded and is more dynamic; the fact that the players have now a limited time to execute an action add a new dimension to the duels. The recruitment system has also been revised and many of the 108 Stars of Destiny are much harder to recruit than in previous versions, with most characters having a recruitment side quest. 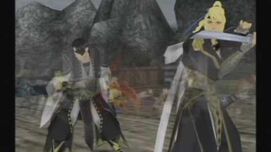 Retrieved from "https://suikoden.fandom.com/wiki/Suikoden_V?oldid=164253"
Community content is available under CC-BY-SA unless otherwise noted.