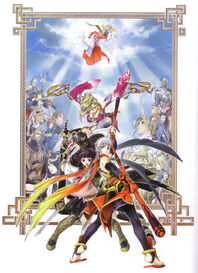 The Sun Rune War is a civil war in the Falena Queendom lasting from 449 to 450.

The war was contested between the House of Godwin, who had performed a coup d'etat against the nation's royal family, and the Loyalist Army, led by the Prince of Falena, Freyjadour Falenas.

The war ended with the liberation of Sol-Falena by Loyalist forces and the restoration of the Sun Rune to the Sealed Room in the Sun Palace.

Although the war is regarded as a civil war, foreign intervention played a part. For example, the New Armes Kingdom were heavily involved, as were the Island Nations Federation, albeit to a lesser and strictly unofficial extent. The war was also monitored with great interest by many other nations, such as the Harmonia Holy Kingdom.

Retrieved from "https://suikoden.fandom.com/wiki/Sun_Rune_War?oldid=136449"
Community content is available under CC-BY-SA unless otherwise noted.