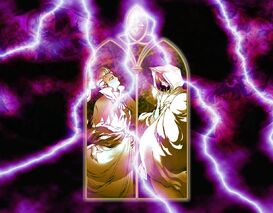 Also known as Gate Rune Wars, the Toran Liberation War was a civil war in the Scarlet Moon Empire lasting from SY 453 to SY 457.

The war was contested between the Scarlet Moon Imperial Army, the reigning power within the nation, and the Toran Liberation Army, a rebel group founded in opposition to the increasingly corrupt Imperial rule.

The war ended with the liberation of Gregminster by the Liberation Army forces and the defeat and subsequent disappearance of Emperor Barbarossa Rugner. The Scarlet Moon Empire was disbanded as a result of the war and the Toran Republic was founded in its stead.

Although the war is regarded as a civil war, foreign intervention played a part. The City-States of Jowston inadvertently aided the Liberation Army, haven been manipulated into invading Senan, a ploy Liberation Army strategist Mathiu Silverberg had concocted to force an Imperial surrender in the region.