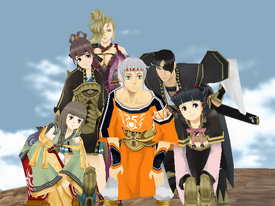 Some characters, items, epic skills and character liking points are missable when you advance in the game to a certain point or make the wrong choice.

Suikoden V presents a new system that affects the Prince’s bonds with some other characters through dialogue options which will show effect in form of some extra scenes, game endings, character recruitments and cooperation attack power. For more details, check out this Liking points guide .

Georg, Kyle, Miakis initially start with better armors but won’t stay long with you until mid-late game, so you’d want their gear for your main characters Prince, Lyon, Sialeeds. Think about Miakis‘ Shield Rune as well.

When you equip a character with all the parts of a set, the special bonus of that set will be added to the characters stat. Recommended sets are:

Try to kill off all enemies units before reaching the battle’s goal because some of them will drop valuables which might even be better than the rewards from a Victory+. You can pause the war with the Select button.

Use them as much as you can because they are free of charge and never miss which makes your attack either stronger or makes it AoE.

Note: Participants still critical hit or multi strike in cooperation attack as they do with normal attacks, the animation just won’t show.

Not only boost up your stats but can be used as another type of cooperation attack for your party. Check out Striking arrow or Tiger for single target or Cross or True Men attack for field attack formation. Circle formation is useful when you want a free attack turn or you are in need to hunt something with hunter rune because its special can unbalance all enemies when used.

Only party skill points will carry over, so you would want to convert all personal SP to party SP before going to reunion with Zweig and Lyon team in the final dungeon (point of no return). Most items/gears/runes will carry over to NG+ (the Sun Set don't carry over) if they stay in your inventory or in your vault, in other word, if your characters are equipped with them during the final battle, they won’t carry over. Some good items to keep for NG+ are :

Early in the game, Sialeeds and Georg are of great help against enemies. However, Georg disappears most of the time while Sialeeds is playable on several occasions. Eventually, Miakis confronts Georg for killing the queen and that causes he temporarily leaves the Loyalist army. But eventually, Georg returns and is playable, except during the final fight against the Incarnation of the Sun Rune. Sialeeds is not playable after the attempted rescue/rapture of the new queen.

There is a little trick that can be useful if the player wants have the option between of Eresh and Euram. Basically, the player has the possibility of using Eresh and collect all the treasures, but must not go to the last room and face the guardian (boss). If the player decide to leave the ruins, Eresh will still remain there, until the moment where the player can recruit Euram Barows. If this happens, the player has the opportunity to decide whether to recruit Eresh or Euram, after Sialeeds kills Salum Barows.

In the game, the armors with more physical defense and with "magic" bonus are: Saint's Cloak and Corruption Shell.

Please help us improve Suikoden Wiki by creating or editing any of our articles.
Retrieved from "https://suikoden.fandom.com/wiki/Useful_tips_-_Suikoden_V?oldid=132716"
Community content is available under CC-BY-SA unless otherwise noted.