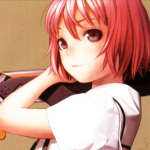 I currently work in retail and I really need to get an office job because I can't stand people and retail stole my soul, I'm also very unproductive these days because of it.

I have a Suikoden, Kya Dark Lineage and Chrono forum if anyone wants to check it out.. It's not active at the moment because I'm lazy, but I do go on it all the time and so does my friend.. it's Suiko Kya Cross, just look it up on Google! It'll have a zetaboards link.

I was doing an rp with my friends and we went into the Suikoden world and well.. my friend made a joke about Esmeralda being lazy and complaining about everything.. so I went the extra mile and turned Esmeralda into a nut case.. but I liked the idea so much that I actually gave her a new personality and made my own Esmeralda.. and I'm currently making a game about her. XD But I'm trying to make her as distant from Suiko's Esmeralda as possible so I don't get in trouble.. she's just based off of the Suikoden character.. but that's it.

Cleo & Meg are my most favorite in Suiko I.

Most Favorite is Mel, my favorite hero of the Trio is Hugo

Since this game is not out in english, I haven't played it, but since I've been working on the wiki.. here are the characters that I think are cool!

Projects I want to doEdit

Make a page about Dopplegangers & maybe a 5 character party.

Play the game, what weapons can they use?

The following pages in the spoiler tag has recently been edited and rewritten or changed by moi.

I've always noticed that Suikoden I and IV have many similarities between each other.

Here is a list of characters that I think she return in another game.

Just think about some of the characters in the series! They were meant to be losers, and I don't mean Tuta either.. I mean the scum stars of destiny.. I was thinking about it, some of them need titles, really!

Krin: Why does he exist? He I obviously the epitome of what a Bum is.. get a job!
Ledon: Don't drop the soap, but then again, he's too ugly.
Mueller: @$$hat, kind of like Nuzhat from Tierkreis except assier....if that's even a word.
Wilhelm: Creep! His pink hair is a trap! It's to lure poor girls!!
Of course, last but not least..
Guillaume: Creepy weird pedophile that needs to be tased with a cattle prod and then locked up. Bitch, hand me a net gun, we are capturing him! Gotta catch em all..Sui-Ko-Den!

I was thinking about it, and there are characters who I think the creators nonchalantly put into the game. Okay, so yes, many of the narcissist characters are very flamboyant. However, Narcissists are mainly nobles and nobles wore frilly clothing back then! However!! I think that *Simone Verdricci and Vincent De Boule, could be more than just friends.. since they were just something else. XD The same goes for Schtolteheim Reinbach III and Charlemagne. But that's all speculation, as is most of it.

Yes, I do ship Fliktor and Riou and Jowy.. lmao.. but it's more for the kicks.

Here are some fun links I want to hold onto, feel free to check them out!

Retrieved from "https://suikoden.fandom.com/wiki/User:Hotspot?oldid=116733"
Community content is available under CC-BY-SA unless otherwise noted.